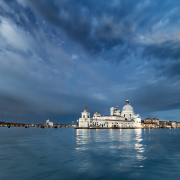 Even though, within the scope of the project dedicated to JMW Turner, Venice was considered a supplementary program to the Lake District, Turner had spent a lot of his time there and many of his famous oil paintings and beautiful watercolour studies are tied to this place.

He first visited Venice in 1819 at the age of 44,  that is, at a time when he was already a mature artist at the peak of his strength, professor of perspective at the Royal Academy. He had rich sponsors among English aristocracy and the king’s favour.  This visit lasted six months, and on his return, he enlarged his residence in Queen Anne Street in London to include a small gallery. He returned to Italy again in 1828 and 1840. In his paintings from Venice we can see his fascination with light, colours and the space of the Venetian Lagoon, but also his reaction to the somewhat decadent image of this city  and its comparison with the developing industrial experience of Britain. It was after his visit of 1840 that he created works which can also be understood as a meditation on the decline of a city. One of them, the cemetery at Campo Santo on the San Michele Island offers a connection between death and decay in contrast with the former economic power of Venice symbolized by the customs offices.

It was our endeavour to  include the Venetian Lagoon as a source for our creativity within the project after the Lake District. These two areas are very different in character and visually despite having water as their dominant feature. In Venice you realize why Turner was able to incorporate so much space, air transparency and lively colours in general into his works. That space itself pushes you to turn your lens to the sky and look for its reflection on the lagoon surface. Turner’s Venice is transparent, bright and rich in colour. There is something magical in his works, and in the way the horizon merges with the sky in an almost imperceptible range of soft hues shattered by energetic brush strokes.

A comprehensive overview of the works that JMW Turner painted in Venice can be obtained here:

On our visit to Venice we focused on the places where Turner actively painted, that is, the islands of the Lagoon, the sunrise and evening views of San Marco across the Lagoon, on taking photographs of the canals at sunrise. Obviously, we did not avoid the central parts of Venice either, up to the Biennale gardens where this year’s Biennale Arte was culminating.

In contrast to our Lake District trip the weather was favourable, so I would not be surprised if at the end of our adventure with JMW Turner there were more final images from Venice than from England in the portfolios of the participants. Opening of the Exhibition THROUGH THE IMAGINATIVE LANDSCAPE OF J. M. W. TURNER,...
Scroll to top